Still no word from Vivid, Sydney Opera House, or the band.
Not really a big surprise on this, but something more solid surfaced...
Late last night Music Feeds gave word that the Cure will in fact be performing.
"Now music feeds can confirm this is true!
Another Vivid Artist, Azari & III have announced that
The Cure will be playing the festival."
Read the full story here
They go on to say:
"The exact details of how many shows they will play
and what they will entail will be confirmed tomorrow,
but we believe there is a surprise in store"
Surprises Surprises Surprises.
Alot remains unanswered, however I think we can expect something nice given all the hype surrounding this concert.
Something more than another festival/singles/pop/90 minute set seems to be in the works.
Meanwhile this is all Vivid gave us: 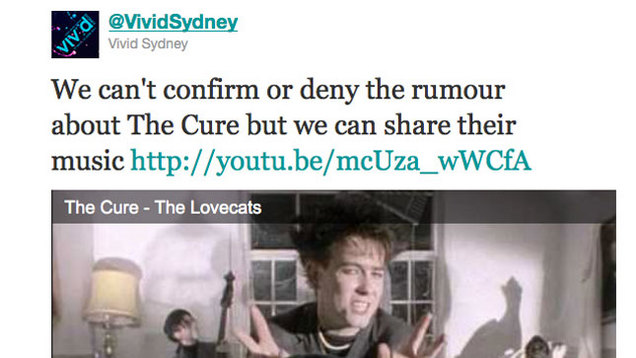